Memories from an October Past

Five years ago today, on Thursday, October 12, 2006, it snowed.  Here is the story of that time from a post on my lj dated October 27, 2006, at 5:50 pm, which was about an hour after our power finally went back on.
Surprise!
I still don’t have my cable back. They are calling it the October Surprise Storm.

Thursday, October 12, 2006. It seemed like a normal day, except that after lunch, while I was headed back to work, it started sleeting a bit. About an hour later when I looked out the window it was snowing in earnest. I left work at 4:30 and the weather was not good, icy, snowy, sleety. Laura came over for dinner and couldn’t leave for two days. 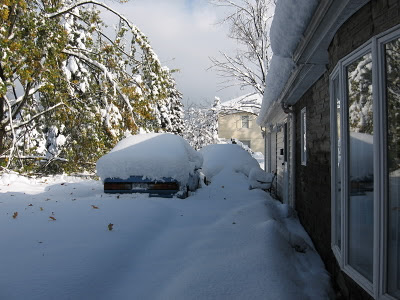 The power went out around 7 pm, just as we were starting to watch Silverado. It didn’t come back on for more than a week. The first night we giggled a lot at how ridiculous it was that the first time Laura and I could get together for ages and now this happened! We put a fire in the fireplace, got out the candles and the oil lamps and sat under blankets in the living room reading Edgar Allen Poe (who, by the way, isn’t really as scary as I remember him to be. What’s that about I wonder?) About 10:30 that night, we ran out to move the cars before they were crushed under the falling tree limbs. It was a bit frightening, cause the limbs were crashing around us as we wiped off the cars and moved them as close to the garage and as far from the tree branches as we could.

Jeff called from Jamestown at 11 pm and I told him to get a hotel. He almost didn’t believe me.

I joked to mom and Laura that we should get in the car and drive out of the storm to a hotel. Where, they asked. I said, how about Florida.

The next day was less fun. We woke up to about 2 feet of snow and all the trees and bushes seemed to be flat on the ground. Huge limbs were torn off the willow tree next door and the driveway was buried. Moving the cars had been a good idea, too, or they would have been crushed. We hung up curtains around the staircase to keep the warm air from rising upstairs.

All that day we sat huddled under our blankets, feeding the fire and reading. We had tuna sandwiches for lunch. Laura’s cell phone died and our phone lines went dead. My cell had a very intermittent signal. We were feeling very sad and cut off. We did try to move the tree limbs in the driveway, but they were so heavy, with all the leaves weighted down with wet icy snow, we could barely budge them. Laura dug her car out, but it didn’t look like she could go anywhere for a while.

They told us not the drink the water without boiling first. It’s hard to boil water without electricity. I tried holding my hand over it and saying abracadabra, but it didn’t work.

That night I slept on the couch.

Saturday some of the snow started to melt, but the branches were still heavy. Around noon, we were visited by angels bearing treats from Tim Horton’s and the boys came to dig us out. Laura left about an hour later. If I could have, I’d have gone with her.

So now here we are, no lights, no heat, no water, no phones. No will to live! Jeff finally got home that afternoon. Poor boy had been working and sleeping in the same clothes for two days. I went with him to tour the neighborhood and almost wished I hadn’t cause it looked so sad. I took pictures. Jeff hung up sheets between the living room and dining room to hold in the warmth from the fire.

Sunday, Jeff started cleaning up the yard. Mom and I went to Mandi’s to do laundry.

By Monday, people starting getting their power back. We had a pole down in the backyard. When I called the power company, they told me we would have ours back, maybe, by next Sunday!! Jeff had to go back to Jamestown and he left the house at 5 am and didn’t get home until 9:30 pm. Our phones came back on around 1 pm. I went to work for about an hour to get some files and then just worked from home, since there was no power at work.

Tuesday, Wednesday and Thursday passed about the same way. Debbie and John lent us their generator. Jeff was working in Newfane, about an hour away, in a building with no roof, in the rain. He was pretty miserable, coming home every night to a dark cold house when he was wet and cold all day. I don’t recommend cooking with sterno.

Wednesday the wood ran out so Jeff and I drove to West Seneca when he got home from work to get some from our wood guy, who couldn’t deliver because he is also a tree guy and obviously pretty busy. That night we went out to dinner. When we came home it was pitch black and poor Bambi was terrified. For the next two days, she wouldn’t let us out of her sight.

And then that wood must have been sitting in the rain for a while, because it wouldn’t light. Other than that, Wednesday night was better because Jeff hooked up some lights to the generator and the TV in the living room. All we could get was channel 7, but at least I got to see Lost!

Thursday afternoon the power went back on at work and they called me to go in on Friday. Also, the oil needed to be changed in the generator. I said I would do it. Jeff was tired and mad. He came home, showered and ate, and went to bed. Then got out of bed to change the oil. In the dark and the cold and the rain, lying on the garage floor, he drained the oil. Somehow, he managed to drop a washer into the oil pan. Bye-bye generator. He went back to bed. Mom and I read by oil lamp with our smoky fire.

The power guys showed up and were working in our back yard on the broken pole. We could see their lights through the curtains as we read.

I went in to work very angry and miserable, in a jean skirt, sneakers and one of Jeff’s hoodies. Everyone else’s power had come on, most of them since Saturday. I hated them all! I stayed all morning, then went home to help mom cook lunch and get the fire working again. I was gone for two hours. I went back for a little while and then I left again. No one said a word. I think they were all scared of me.

I was pretty sure I couldn’t take another day of it. I was feeling very suicidal. Jeff was miserable, mom was having chest pains.

When I came home from work my driveway was blocked by power company trucks!!! Jeff came home and was in the shower. Mom and I were sitting and reading. At 4:40 pm, the power came back on!!!!! Mom blew kisses to the men out the front door. I ran upstairs and started flashing the lights on Jeff in the shower. Everyone felt better immediately.

Our back yard is pretty ripped up from the men walking and standing around.

Also, just for fun, our power went out again on Wednesday for a while.

And, as I said, we still don’t have our cable back on. They tell me it will be sometime between now and never.

See more pictures.
Posted by Toni at 6:00 AM