And Don't Even Get Me Started About SyFy Movies

I watched a Lifetime movie.

I don't do this often. We call Lifetime the Women in Peril network and mostly we laugh about the extreme awfulness of most of their movies . There's just something about those random, Canadian, made-for-TV movies (not that there's anything wrong with Canadian TV; I love, love, love Flashpoint), sort of technologically behind the times, grainy, generic and with slightly off accents.

This one wasn't really any different. The only reason I found myself watching it at all is because the cast included Marc Singer, Tahmoh Penikett and Colin Cunningham, all of whom make my geeky little fangirl heart go thump. (But don't get too excited guys, cause I've been geeky my entire life and I get excited about lots of people.)

My love affair with Marc Singer goes way back. When I was in high school we watched this amazing version of Taming of the Shrew (this also made me fall in love with Shakespeare and I'd totally geek out if I ever saw him) with Singer as Petruchio. He was amazing! He just leapt off the screen, he commanded your attention. (I seriously hunted down and bought that video, now on DVD, when I became an adult and realized I could do that.) Of course, he became well known. He was The Beastmaster, he was in Roots, V, Dallas and had any number of guest appearances on popular shows throughout the 70's and 80's. But when I think of Marc Singer, I remember Petruchio.

His career went on and as the 80's turned into the 90's and the 90's to the 2000's, he started doing more of those sort of random TV movies. Seeing him in this one made me a little sad.  Sure, you can see that he sort of remembers the swagger of days gone by (as he leans down to chat to a witness, adjusting his tie), but these movies, they take it out of you.

I get that an actor has to eat, so they have to work. I'm guessing that even being on a sucky movie or show is better than the alternative, waiting tables, manual labor, bag boy at Walmart, but it has a cost.

The entire movie has this sort of pedantic, studied flow. A measured pace that lags just behind the music, if you know what I mean. Lines are delivered with that forced emphatic-ness that shows you clearly mean business. You must remember what I'm saying now, because this type of dialogue is how we move the story along, this is our narrative, our discourse. It makes you aware how difficult it is to really write a good, solid screen play that is interesting and makes sense and how much some of these things must get cut up and put back together during the process of editing, filming, editing again.

So anyway, I watched the movie. And I cried to see Marc Singer blend into the background of the random sameness. And I cried a little to think that Tahmoh and Colin, both of whom brought so much energy to the screen in their way-too-few moments that it seemed almost frenetic in comparison to everything else, may some day end up there, too.
Posted by Toni at 10:09 AM No comments: 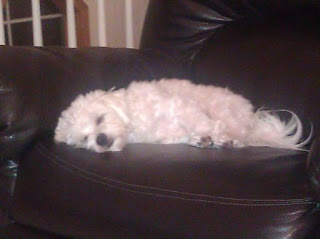 Him:  Do you think the puppy speaks Spanish? Maybe that's why she doesn't follow directions!

Me: I don't know, I think "NO" is pretty much the same in both languages and most violent hand motions are universal.

Him: Did you use rounded spoonfuls of coffee for this pot?

To Duet or Not to Duet

Now that American Idol is over, there's a huge gap in my life that apparently needs to be filled with a bad karaoke singing competition, so I thought  (since my husband is working nights and can't stop me) I'd give the new singing show Duets on ABC a try.

I've watched the first few eps now and I have to say I don't really get it.

I mean, I understand the show, but I don't get why they chose the "celebrities" they chose and why those same celebrities chose who they chose to sing with.  The reason I've put celebrities in quotes is cause, honestly, I couldn't have picked one of them out of a line up and I could not name one song that any of them sings.  OK, that's not entirely true, I did sing a Kelly Clarkson song at a wedding once. But I don't remember the name of it.

Beyond that, having the competitors voting for each others choices, doesn't even make sense. Cause clearly, if they are thinking straight, they will award lower votes to the better artists, to get rid of the best competition so they can win. Right? Amiright?

I guess at some point, America gets to vote, but I seriously doubt anyone will still be watching by then. I feel like I barely know the contestants at all, since they are only allowed about 3 mins of screen time each (2-hour) episode and most of that is during their duet with the raging egomaniacs celebrity mentors that are their partners.

And for another thing, these randoms picked up off the street can't help but sound amateur next to their "celebrity" duet partners, cause, they just can't.

I'm giving it another week. Maybe.
Posted by Toni at 1:11 PM No comments: