In Loving Memory of Anthony Marchese

"Don't forget Aunt Annie." My uncle Anthony pulled me close in a hug the day my Aunt died. We were all at his house afterwards, sitting around, aimless and numb.  He whispered those words in my ear as he held me with tears in his eyes.  Just two weeks after her funeral, to the day, we were once again at the same funeral home. But this time, it was my uncle in the casket at the front of the room.

Suddenly, the word numb takes on a whole new meaning.

He missed his wife, he was ready to go be with her. Plus, he was a stubborn man and once he made up his mind, he got things done.  So the fact that he lasted less than two weeks after she died isn't even a surprise. He was determined. But it really hurts.

I feel like I have so much to say about Uncle Anthony, but I'm not sure where to start. Of all the memorial blog posts I've written in the last few months, I think this one is the hardest.

He was in the Navy during WWII and his aircraft carrier was sunk. He was one of the few survivors. Then he worked at Bell Aircraft (it's Bell Areospace now) and was involved in developing the Rascal Missile and the Rocket Belt. Interestingly, his older brother, Anello, who died in 2006, was the lead engineer at Bell and worked on the X-1, the first supersonic aircraft.  So at least I was related to smart people.

Uncle Anthony then went on to work at Moog Music as Director of Engineering and developed a bunch of different musical devices, many of which were used by popular groups at the time. If you don't know about Moog, their synthesizers were a huge part of the musical scene, starting in the late 60's, and had a major influence on disco and rock. One of the first rock groups to use a Moog were the Doors in 1967 on their album, "Strange Days."

My uncle created the Moog Liberation, used by all sorts of people and groups, like Santana, Devo and Herbie Hancock.  This isn't a great pic, since I took a pic of a picture with my cell phone at the funeral, but here's my uncle - back in the 70's - pretending to play it.  He thinks he's tall here. 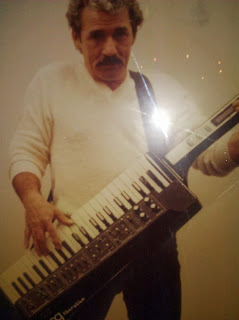 In 2008, Uncle Anthony was inducted into the Buffalo Music Hall of Fame. The best part was my Aunt Annie calling everyone she knew, all excited, and tell them, "Anthony has just been indicted!"  People weren't sure if they should be happy or worried.

According to our pastor, my uncle was a humble man. While delivering the funeral service, pastor made mention that even though he had known my uncle for over 30 years, he didn't know many of the things that Uncle Anthony had accomplished, but read them in the obit (which you can read here).

Our family had a different take on Uncle Anthony. He loved kids, especially his kids, grand kids and great grand kids, and when we were all little, he had us call him Uncle Beep-beep, cause we'd press on his rather sizable nose and he'd make a beep-beep sound, like a car horn. But he was also a cranky, stubborn old man who didn't like people. I get that from him. Alright, maybe he liked some people, but you know what I mean.

He was incredibly picky; his food couldn't touch on a plate. Seriously, the man had to eat every meal on those divided plates and wouldn't eat any kind of casserole or mixed dish.  He loved to travel and to "get out of the house." He dragged my aunt on long drives through the country, stopping at garage sales and drug stores, buying so much stuff they didn't need. Their house was just loaded, their cellar had stacks and stacks of...well, I guess the word is, again, stuff. They also went on tours with Ramblin' Lou. Maybe that's a Buffalo thing, but he was some sort of country music DJ and performer. Maybe he still is, I'm not sure. Anyway, he and his wife do these tours, all over the place, like cruises or trips to Atlantic City, and they went on so many that Ramblin' Lou knew them and came to the funeral.

It's still so hard to believe they are both gone.

Sorry for your lose, Toni.

He sounds like a wonderful man who made an impact while he was here - a life well lived.

What an accurate description of Grandpa. I cried through the whole blog. I miss them both so much. I still can not believe they are gone. Not a day goes by that I don't miss them, think of them. I am so proud to be there grandaughter...so proud to be a Petrillo/ Marchese:) I have some of those crazy Marchese traits or as Grandma would say the Marchese crud! Love and miss you and appreciate your words you shared.

Kelly, I love you, too! I'm proud to be a crazy Marchese myself. I miss them both so much and so does mom, of course. She lost her best friend and her brother, just like that. But as long as we all love each other and keep our memories of them alive, Grandpa and Grandma will always be here.

I met Tony through his daughter, who I played in a band with. Tony invited me to Moog one day, I met everyone, and was allowed to spend as much time as I wanted there, for many years. I spent time with his family on occasion, and enjoyed their company. Maryanne was a great performer and singer. He was a joy to know.

I was pretty acquainted with Tony back in the days when he worked closely with my father, David Luce, on synthesizer development, and I was just a kid coming into the factory with my Dad, or working there later on after High School. I'd hang out in Tony's office sometimes. He was incredibly friendly to me. Always remember that big smile. And he was indeed a talented guy. Miss him very much.