The UK Trip 5...Friends and Meds

I developed a wheeze in Cardiff. Not sure if it was allergies or the plane ride or just that the air disagreed with me.  I hadn't taken Airborne or echinacea or anything else like I usually would do before a trip. I had just been sick for almost a month, so I didn't see how I could get sicker.  I was wrong, there was even more sick.

The wheeze turned into a cough. By the time we got to Manchester, it wasn't terrible, but it was building up.  My lungs were starting to feel like they were filling up with mucous. Ugh!  The cough went on for....well, what day is it today? CAUSE I'M STILL COUGHING!! Alright, not like I was in the UK, but still.

Monday night, after dinner, we had to find some drugs.

But more about that later.

When I realized that we really were taking this trip, one of the first things I did was hop on to one of the Buffy-related message boards where I've been talking to some invisible UK friends for years. And years. And maybe even more years than that.  I was really hoping to be able to meet up with some of them and - YAY! - it happened.

Ditto invited us to her home for tea and DeeDee was able to come up to Manchester to be there as well.  I'm not sure they even realized how exciting it was for me.

The best part of a trip to a foreign country is really being able to interact with normal people in their own setting. And now I've made it sound like a visit to the zoo. But you know what I mean.  I got to see my friends, for the first time, and I got to be in their home. In their home! I mean, who does that, invites a complete stranger and her crazy husband over? My invisible internet friends are the very best ever. Clearly.


We had a wonderful visit. Tilly is a hoot and she kept Jeff busy, so that was good, too.  We stayed so long, they were probably cursing us cause they wanted to have dinner and put Tilly to bed, but the British are so polite, you couldn't even tell.

So we did try to stop on the way back from Ditto's to get some drugs cause the wheeze was becoming an issue.  Our hotel was right next to this giant shopping center so it seemed like it would be no problem. We drove in to the Trafford Centre and thought we would go in for dinner and to find meds.  But the place was ginormous. We couldn't find the door. All we could find were dozens of roundabouts taking us to vast, full parking lots from which we could glimpse the tops of the buildings in the distance. But no doors.

Jeff was all for just parking and finding our way in. At that point I just wasn't feeling it.  No way I was going to hike three miles from the parking spot to the building to have to then wander around it aimlessly looking for a way in, not even knowing if where we ended up would put us anywhere near food and/or drugs.

So we went back to the hotel, ate there...the food was just so/so and I only had a - quite expensive - burger, so we may just have gone across the street to the Burger King or whatever...and then had to ask how to find a store where we could get medicine. They kept pointing us to the shopping mall. Um....NO!! Finally, a nice lady sent us just down the street (through maybe only six roundabouts) to the Asda. Basically, this is a Walmart. I mean, it actually says Walmart on it, but for some reason they call it an Asda. I have no idea.

I was able to purchase medicine, but not before having to explain all my symptoms to a pharmacist or clerk or something behind a counter, because they don't sell cold meds or cough syrup in the actual store. You have to get it from behind the counter. So strange.

We also bought a bunch of random cakes and goodies, cause it was my birthday, after all. 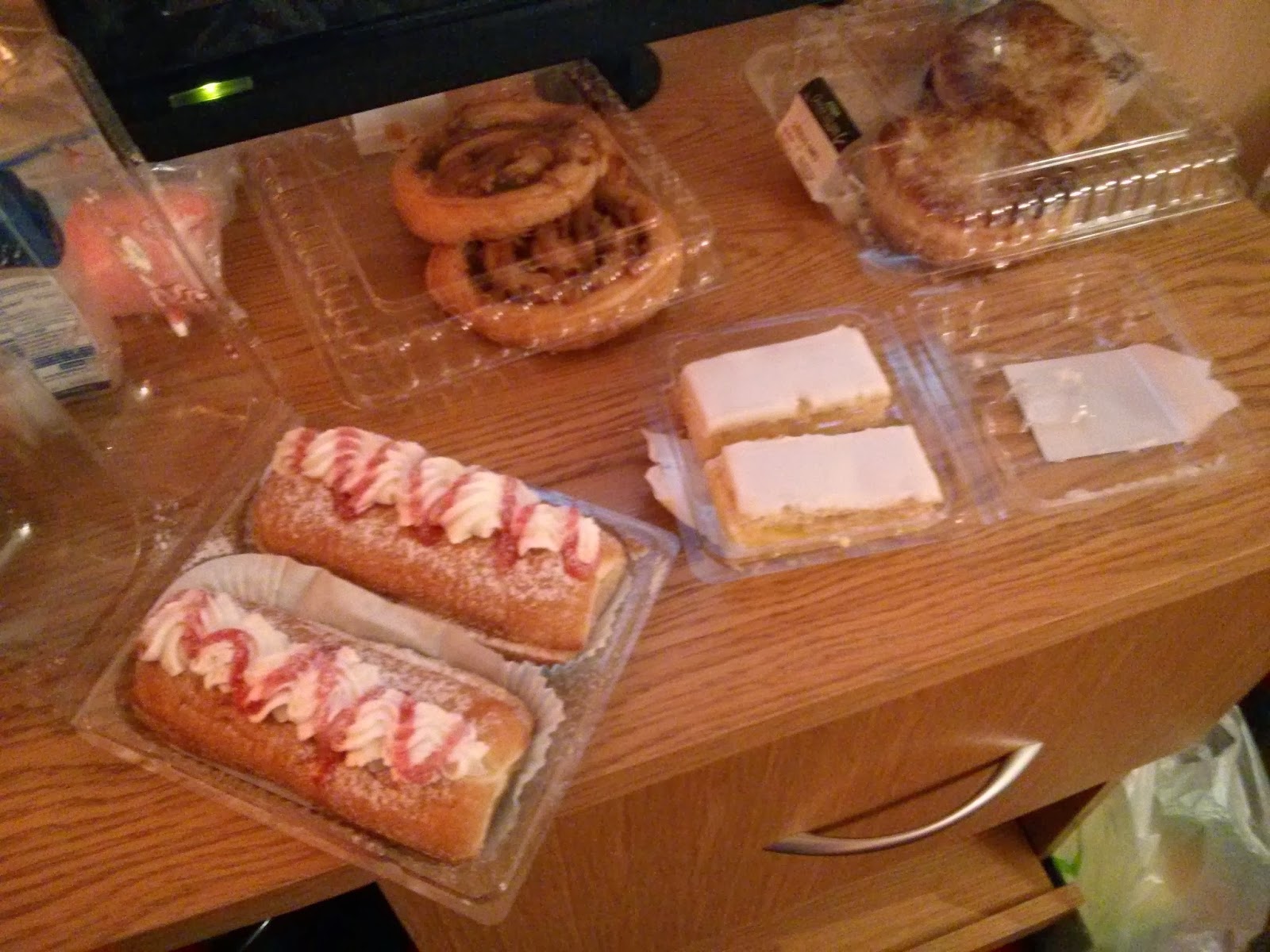 The UK Trip...Shakespeare and Birthdays

One thing I realized right away about actual England and my ideas about England is that I am a romantic.  Who knew?

For instance, in Bath I expected ladies with parasols and long sweeping Regency dresses (a la Jane Austen novels) to be walking down the streets on the way to the lending library or to take tea at the pavilion or even for Prinny, the Regent himself, to be holding court in the assembly rooms.  In Stratford, I was looking for gentlemen in Elizabethan dress with side swords who would bow and lay their cloaks over water puddles for me.

We didn't even see one kilt in Scotland.

Instead, there were Burger Kings and McDonalds and KFCs on the corners and lots of random nationalities wandering in large, chaotic groups, talking in foreign languages a mile a minute and bowling over anything in their path. Seriously. Of course, this is more London, but there were tourist groups pretty much everywhere.  The nerve.

So we drove through the dark and the rain in traffic on the way to Stratford. Now Jeff knows how I feel when I have to drive at night.

We woke up in Stratford on January 13, my 50th birthday, and took a lovely walk along the Avon to see Shakespeare's grave in Holy Trinity Church. 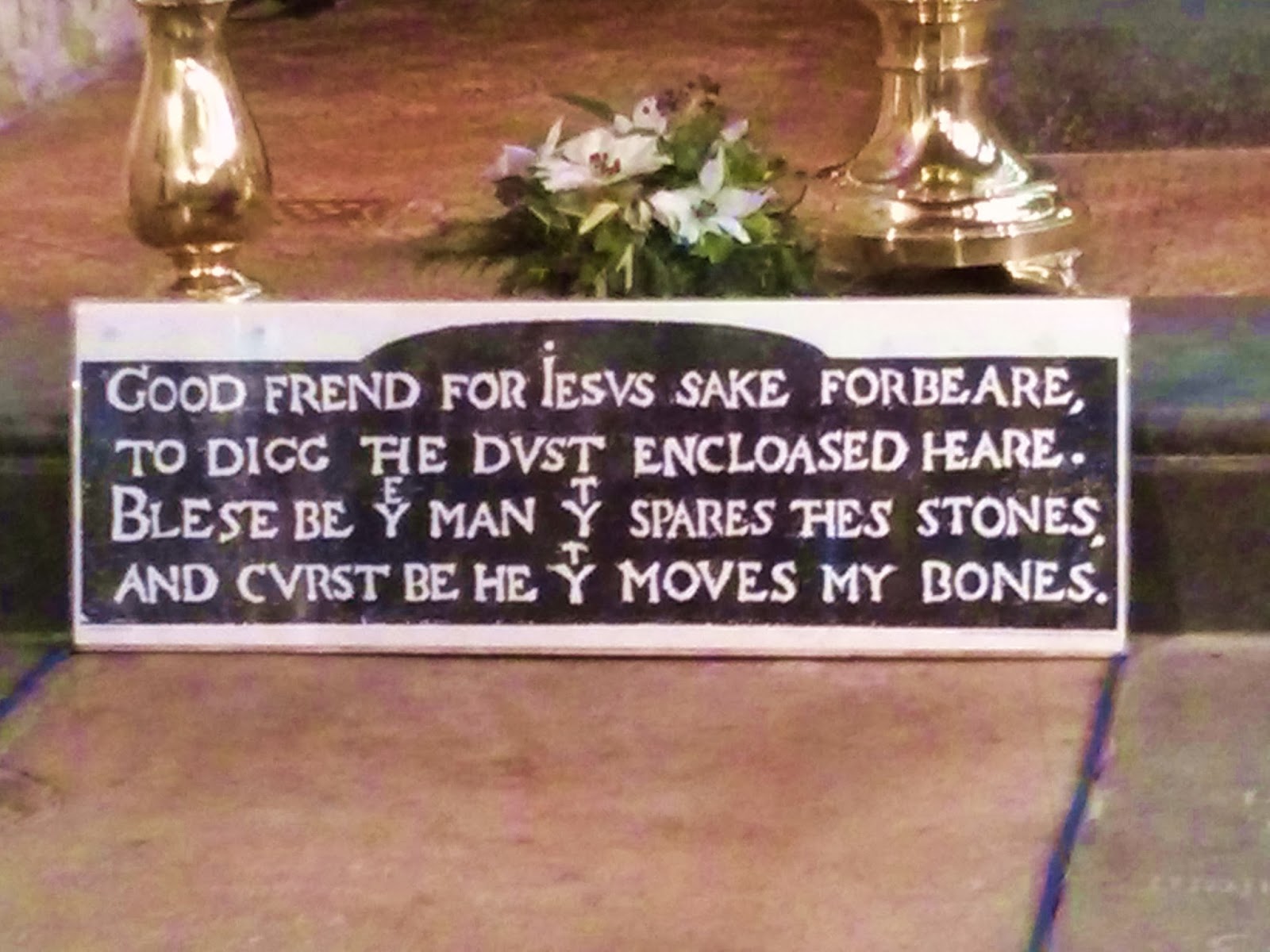 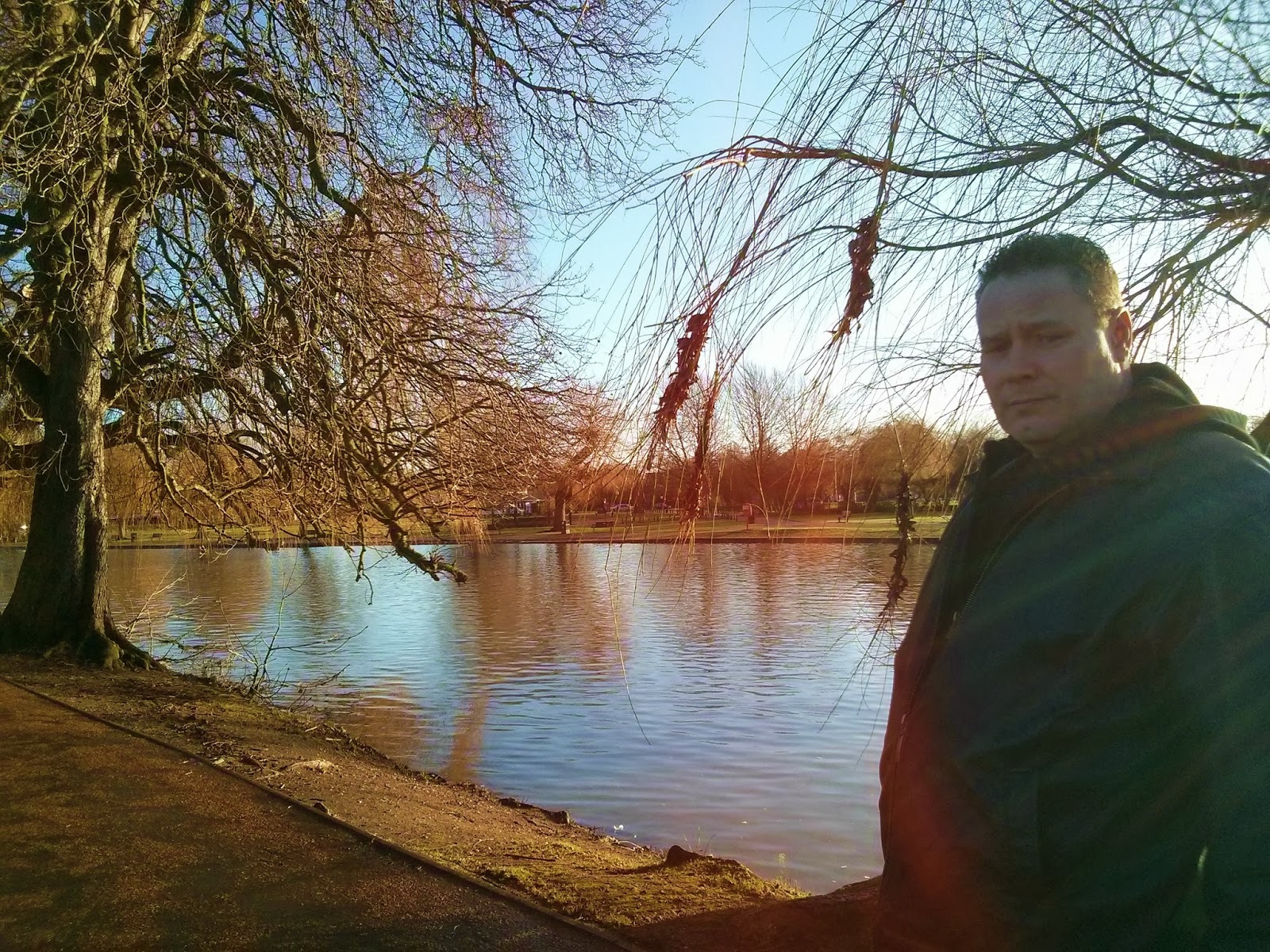 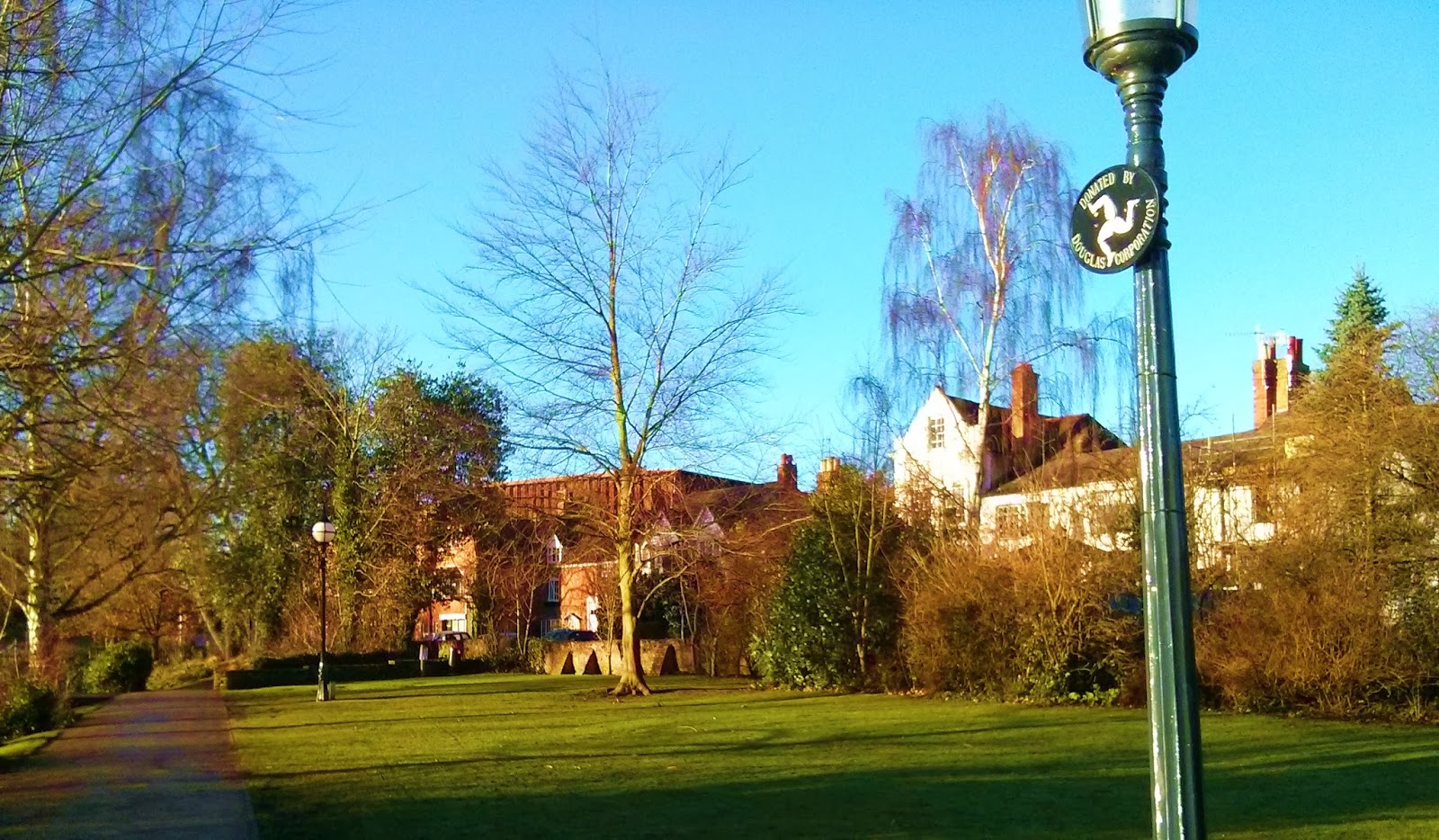 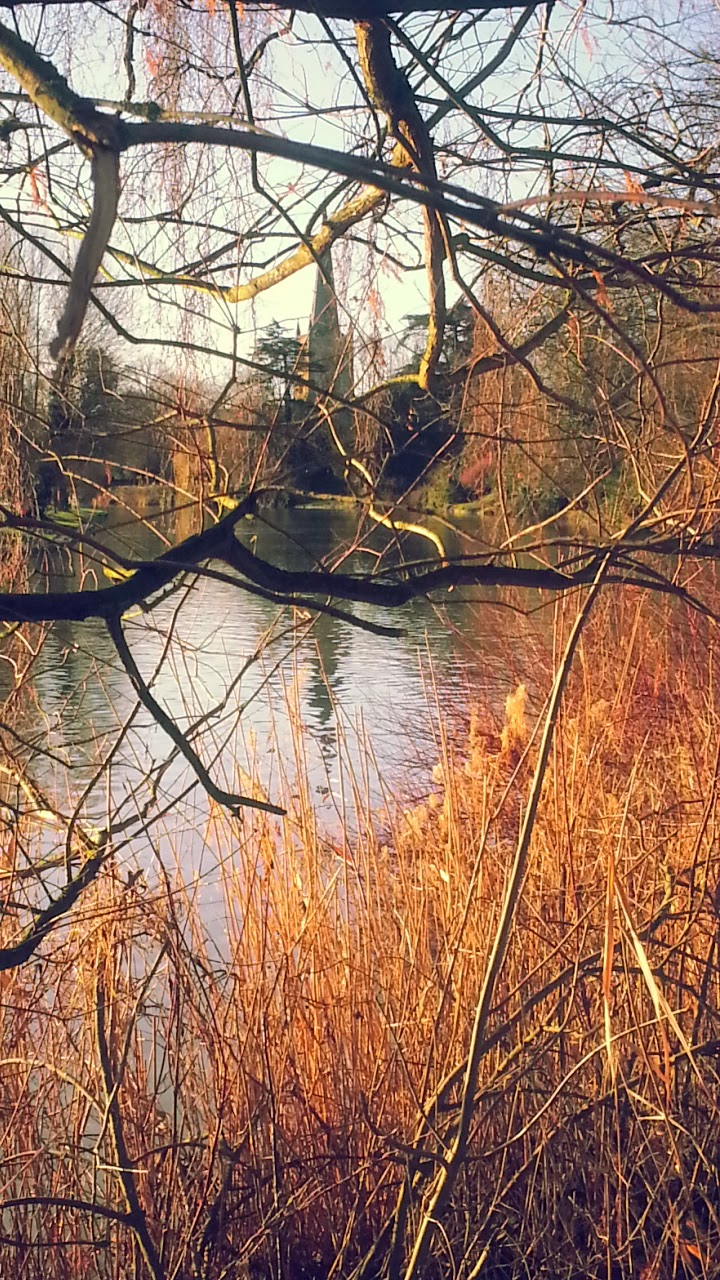 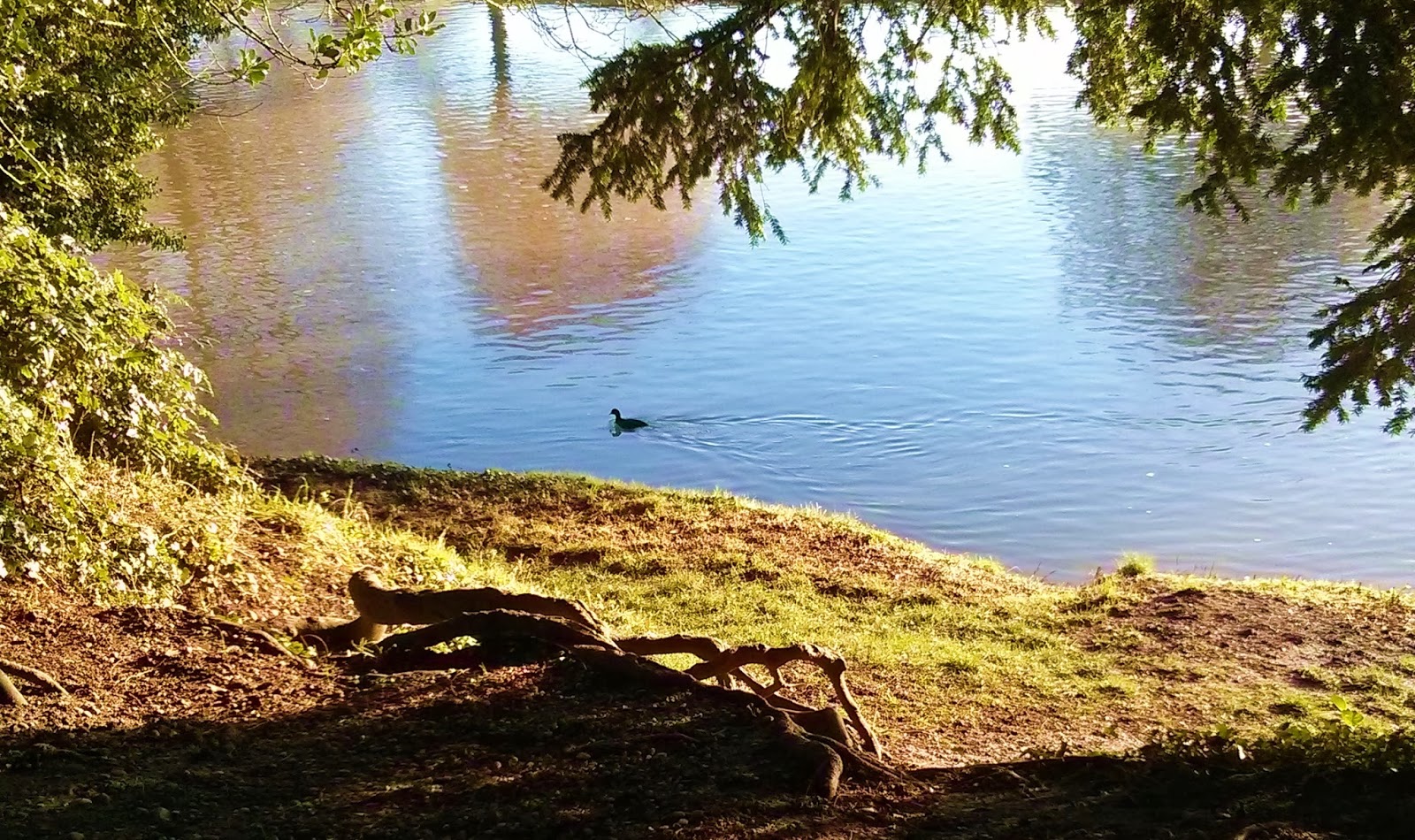 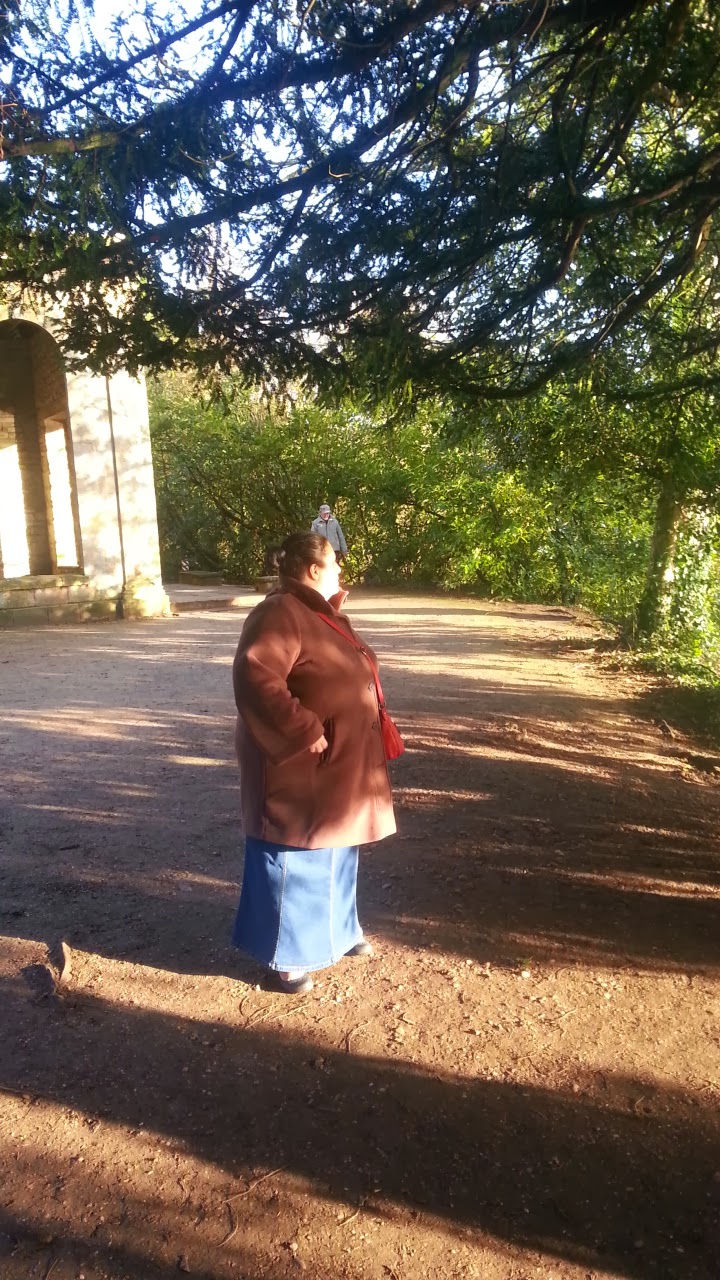 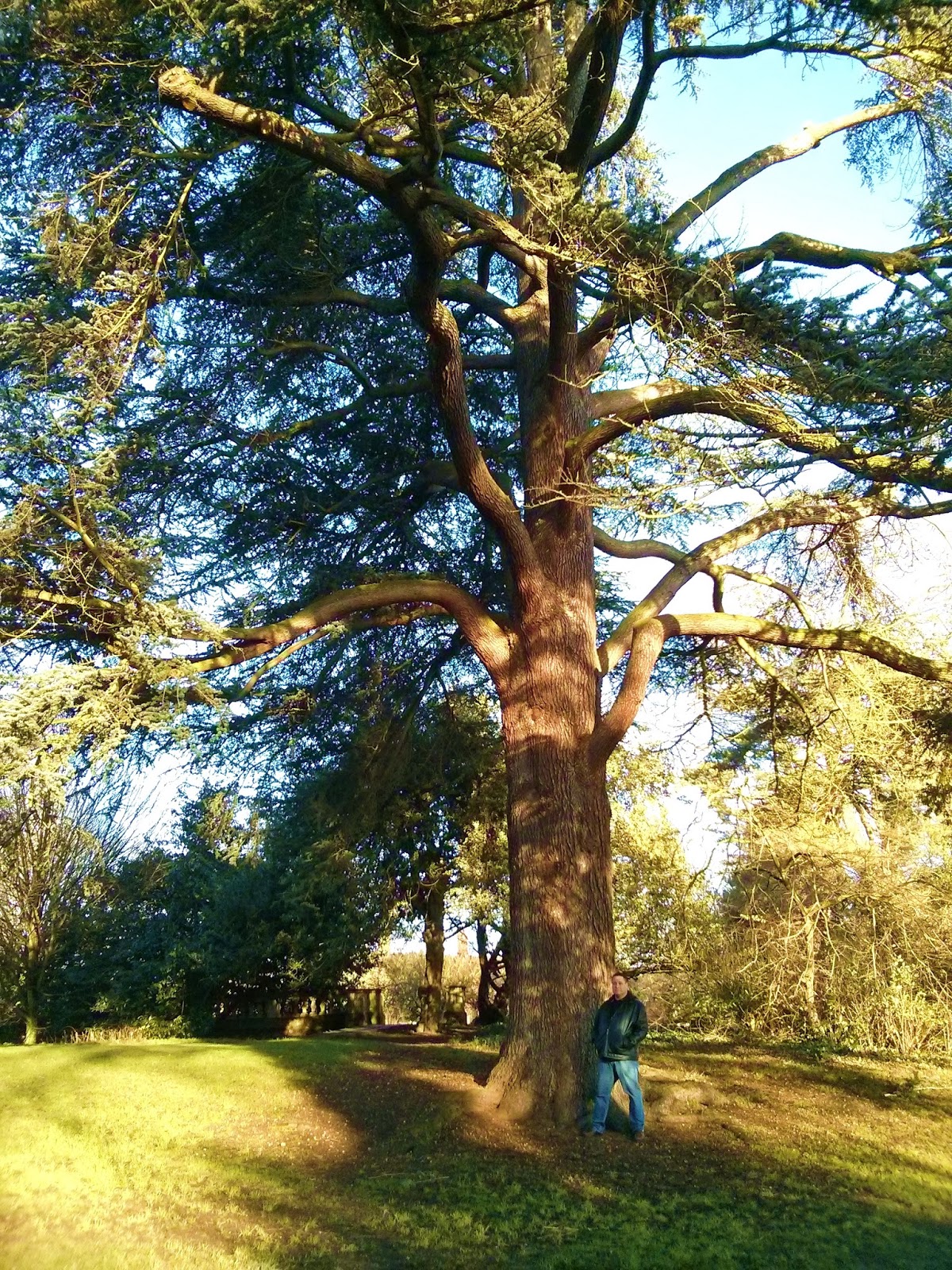 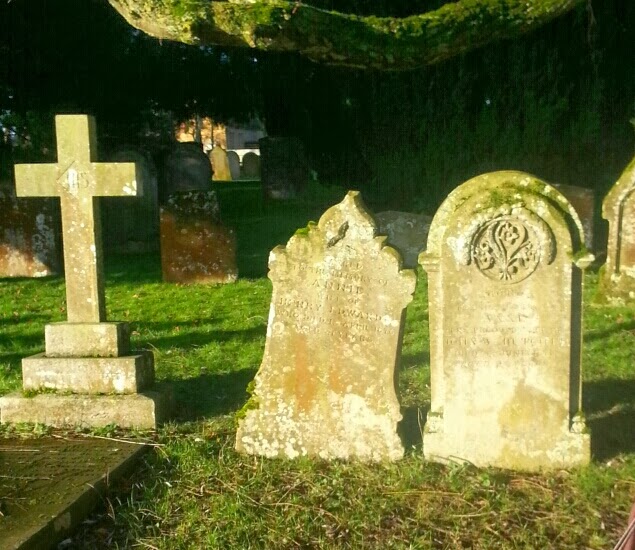 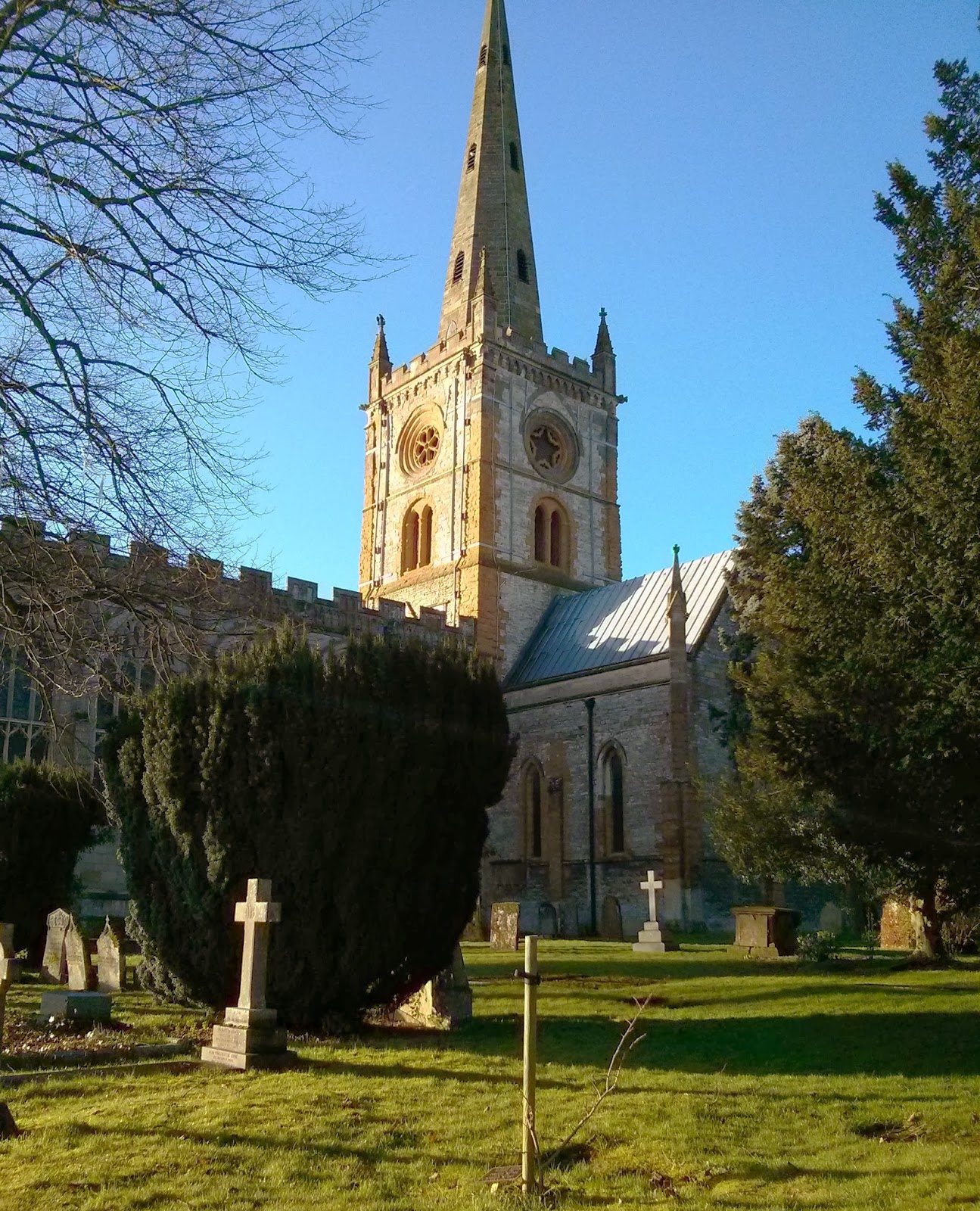 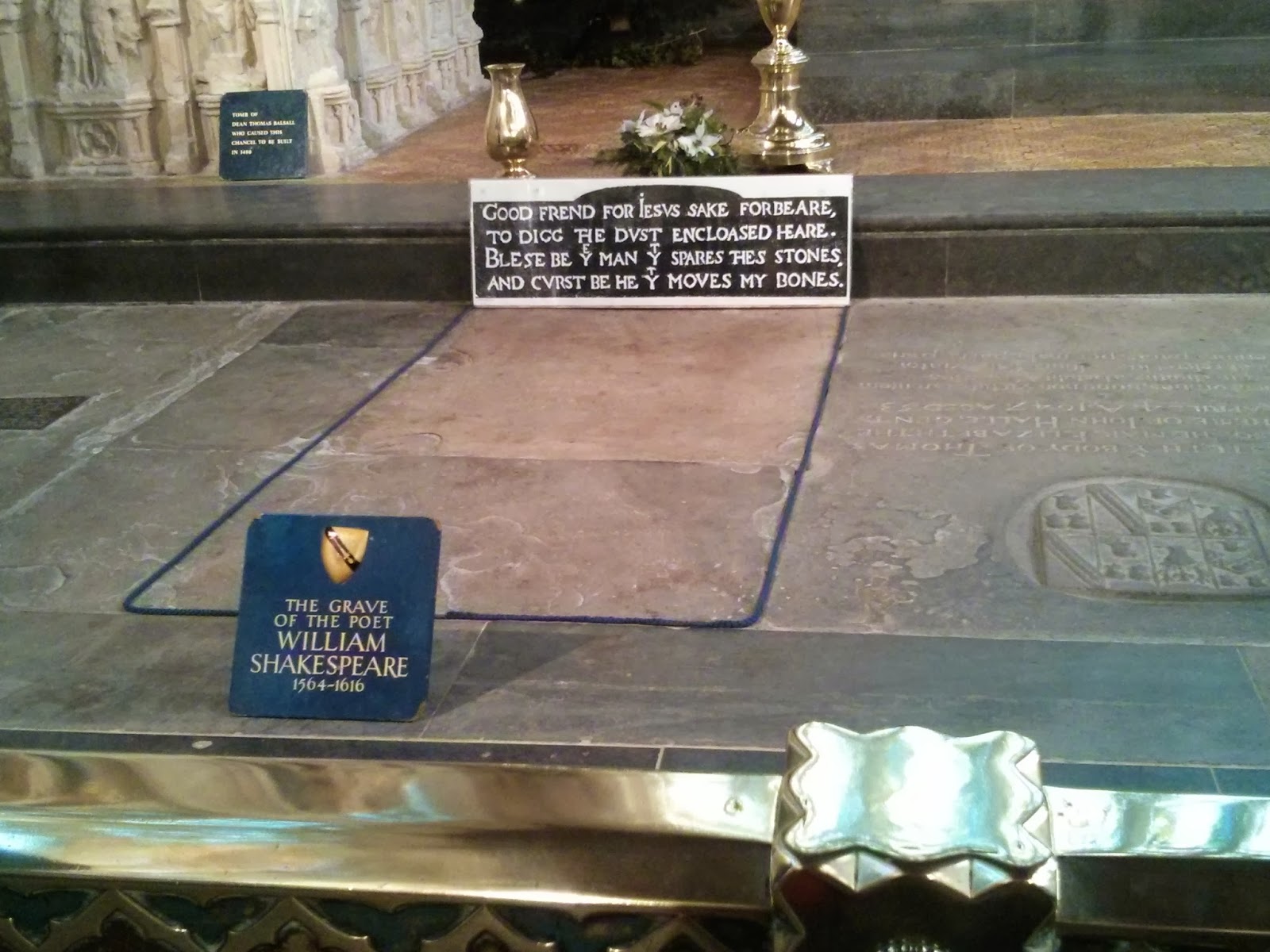 Then we strolled back through town, passing Hall's Croft (where his daughter Susannah and her husband Dr. John Hall lived), New Place (where Shakespeare and his family lived, which is basically just a garden on the corner now) and John Nash house (which is where his granddaughter and her husband lived).  We didn't go in any of them for several reasons. 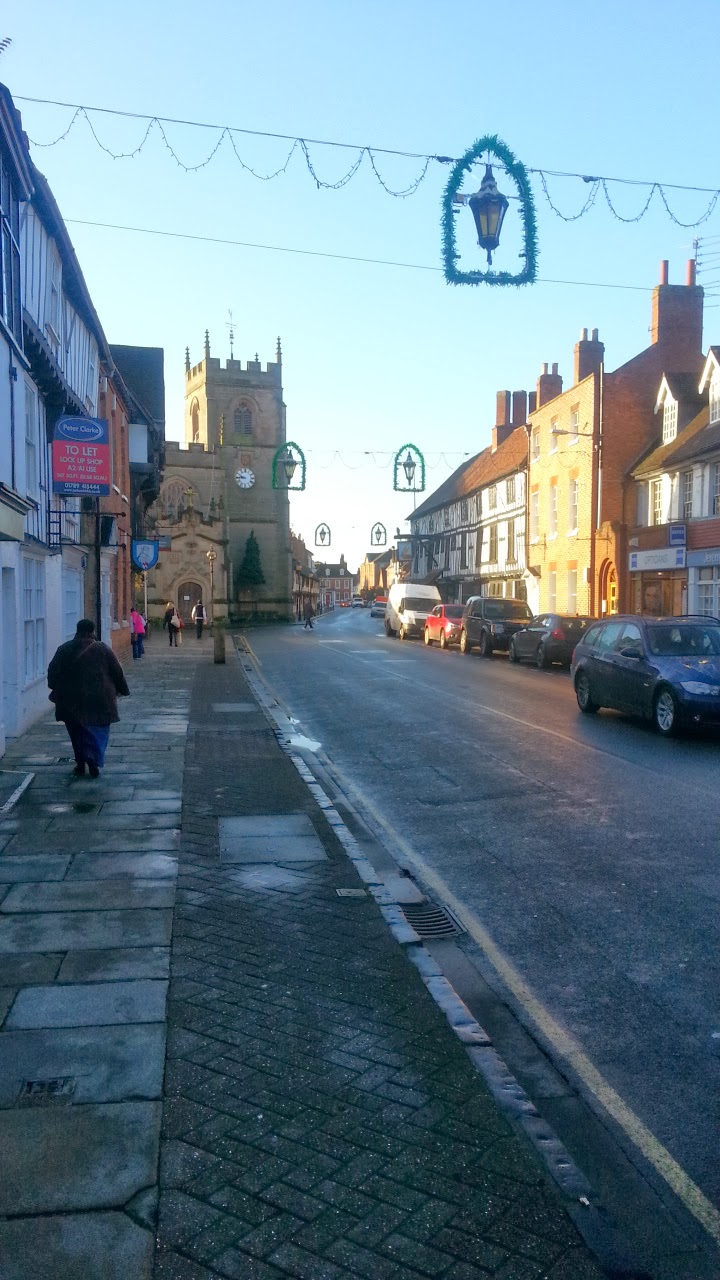 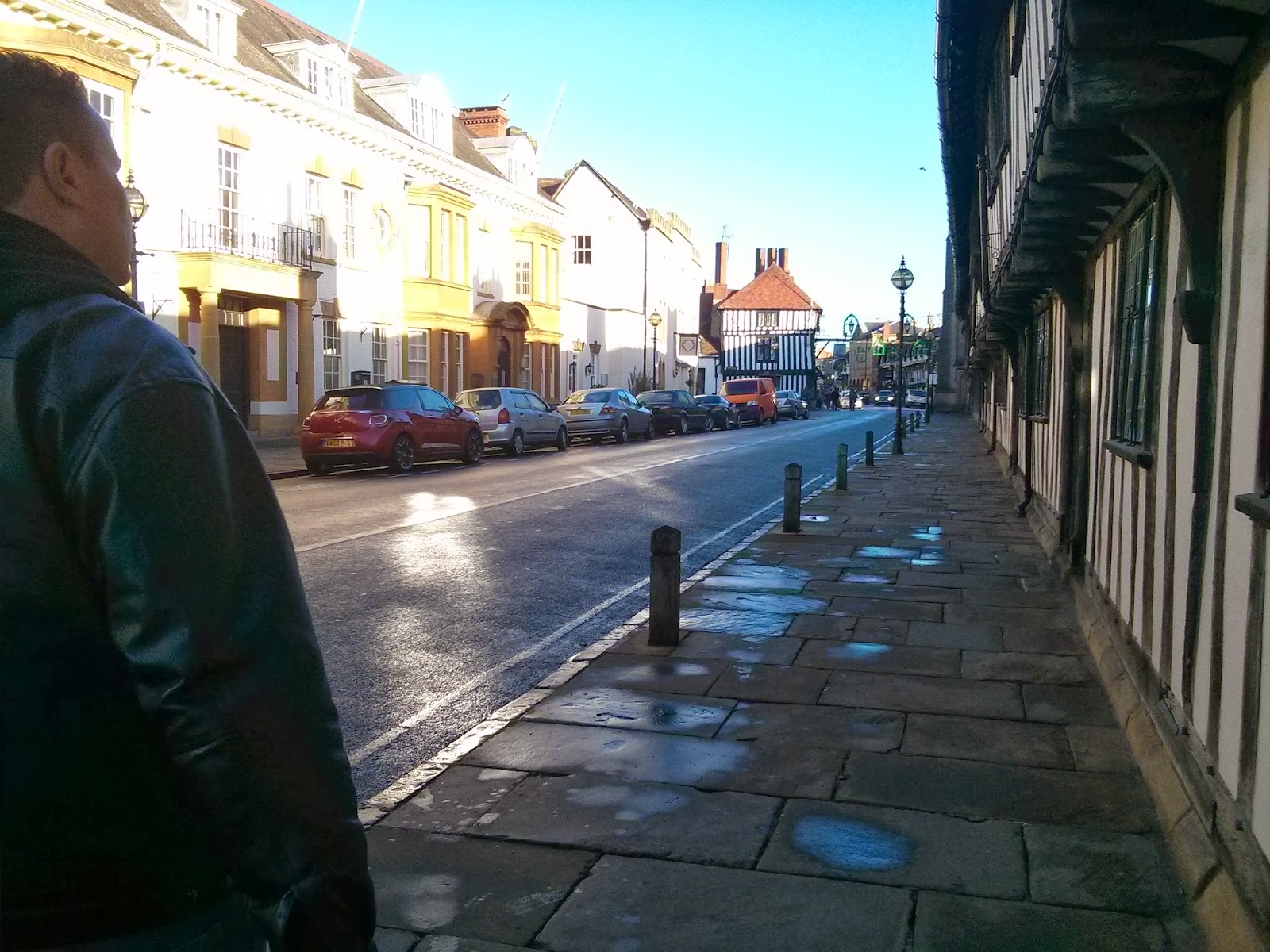 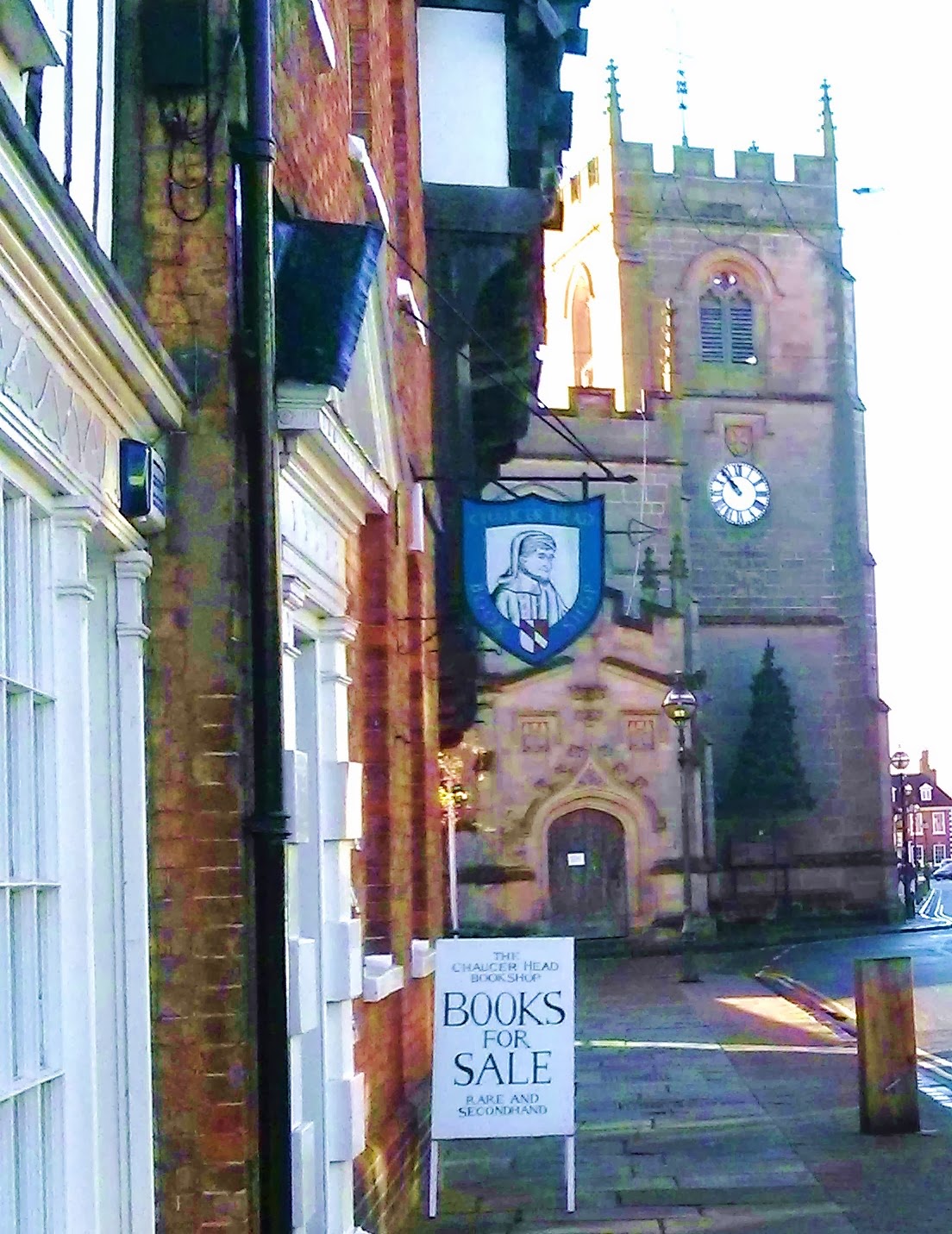 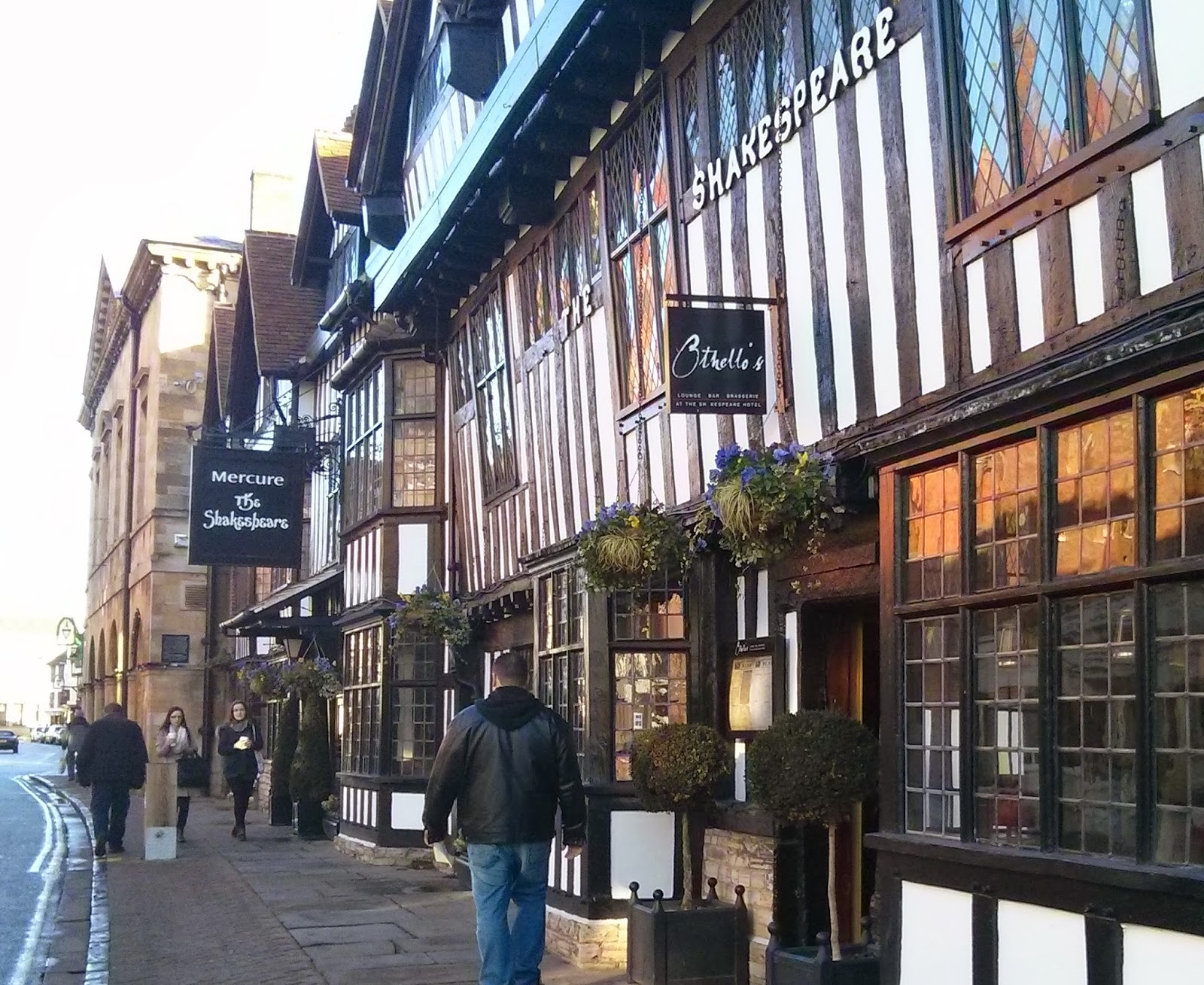 Mostly it was because of time. We needed to be in Manchester by tea time. Also, we didn't want to spend more money than was absolutely necessary and so we choose what we wanted most to do and that was to see the town and to visit the grave. The walk along the river was beautiful.

Oh...and a bird pooped in my hair. That's like a good luck thing somewhere, right?  Right??

But we did see the gardens and then drove past the birthplace - twice, cause we missed it - and Anne Hathaway's cottage, where we got a glimpse of the thatched roof among the scaffolding while rolling past. 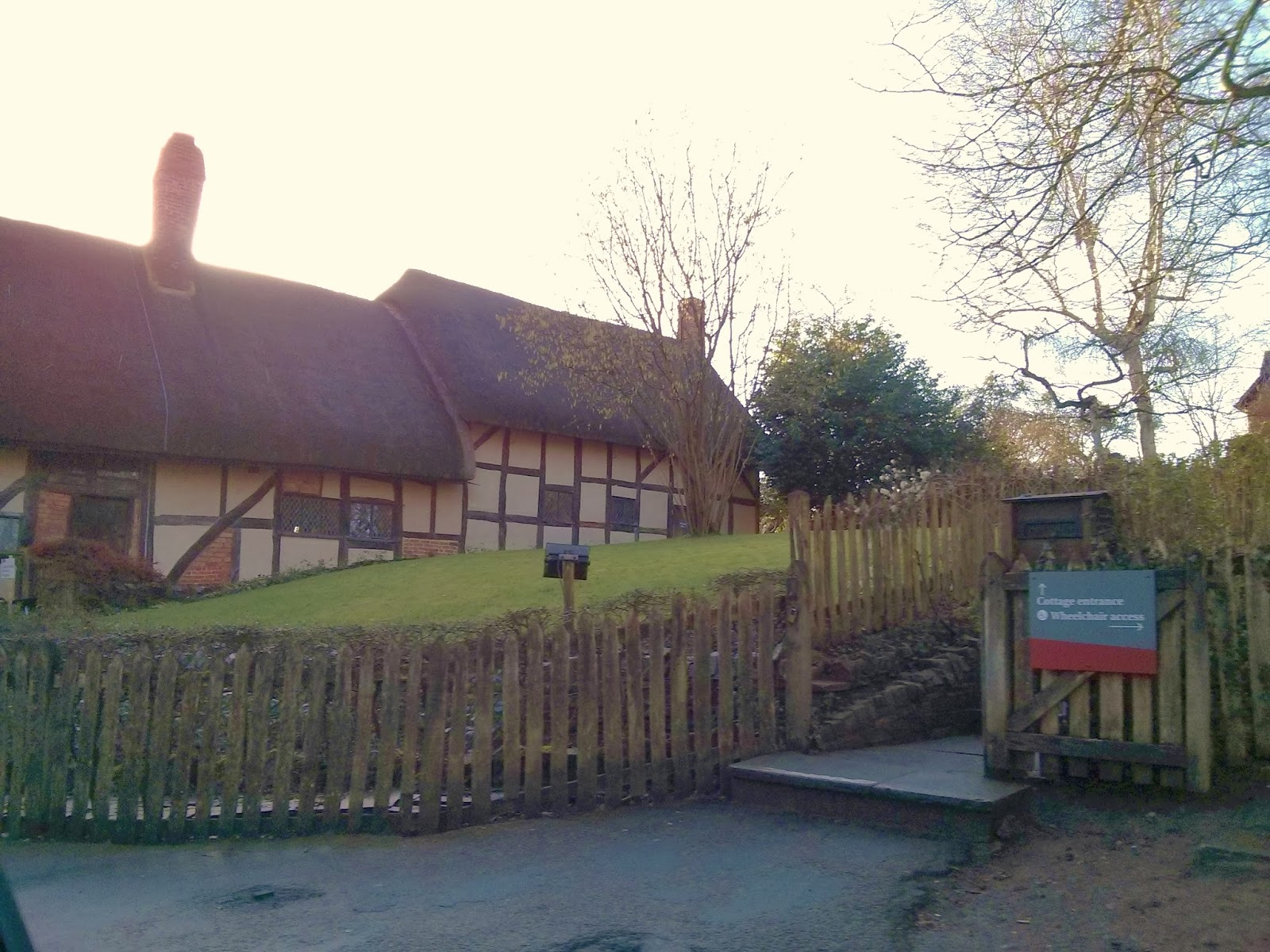 No matter what we heard about British food, everything we had was good. Of course, I had fish and chips several times, plus a lovely steak and onion pie.  Jeff was more adventurous; he had bangers and mash one night and even had haggis in Scotland.  He was really enjoying the sausages, especially in Stratford, where they had fresh local sausages from a butcher just across the street. 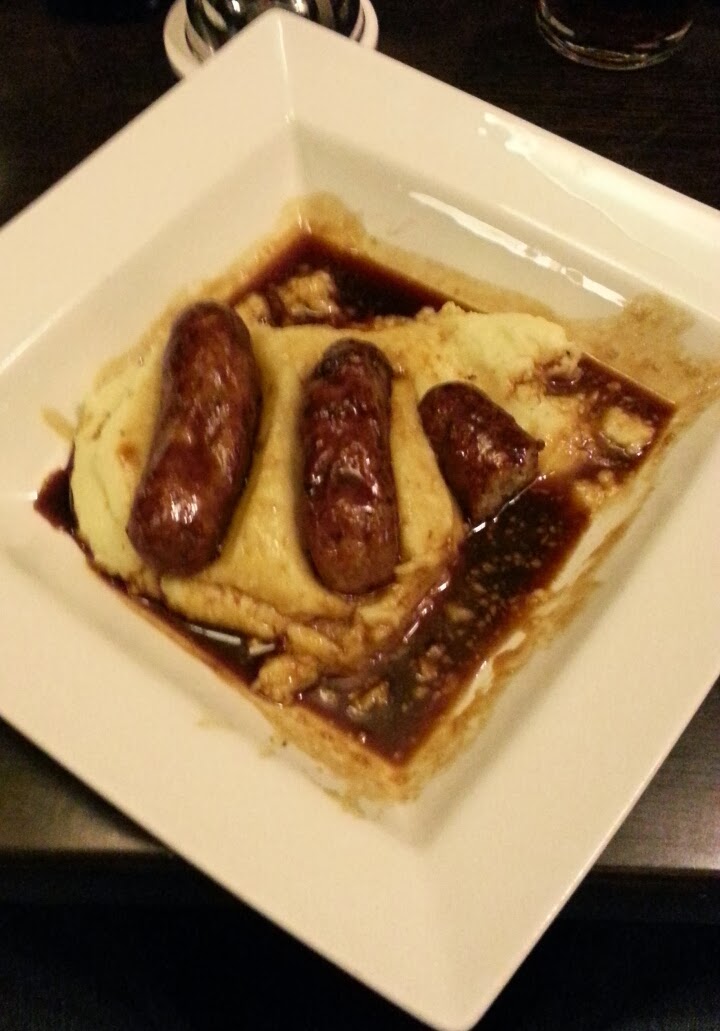 Breakfasts were a little strange. I mean baked beans and tomatoes sounds more like a picnic to me, plus I personally don't eat either one of those things. But I did fall in love with porridge and brown bread.  I've tried to re-create porridge several times since we've been back, but I can't quite get it right.

I'm open to any and all suggestions.


My birthday continues with more invisible friends next.
Posted by Toni at 5:39 PM 2 comments:

I keep trying to tell this story in a linear manner, but it's getting harder and harder to not wander off topic down quaint little alleyways of nothingness. I'm super good at that. 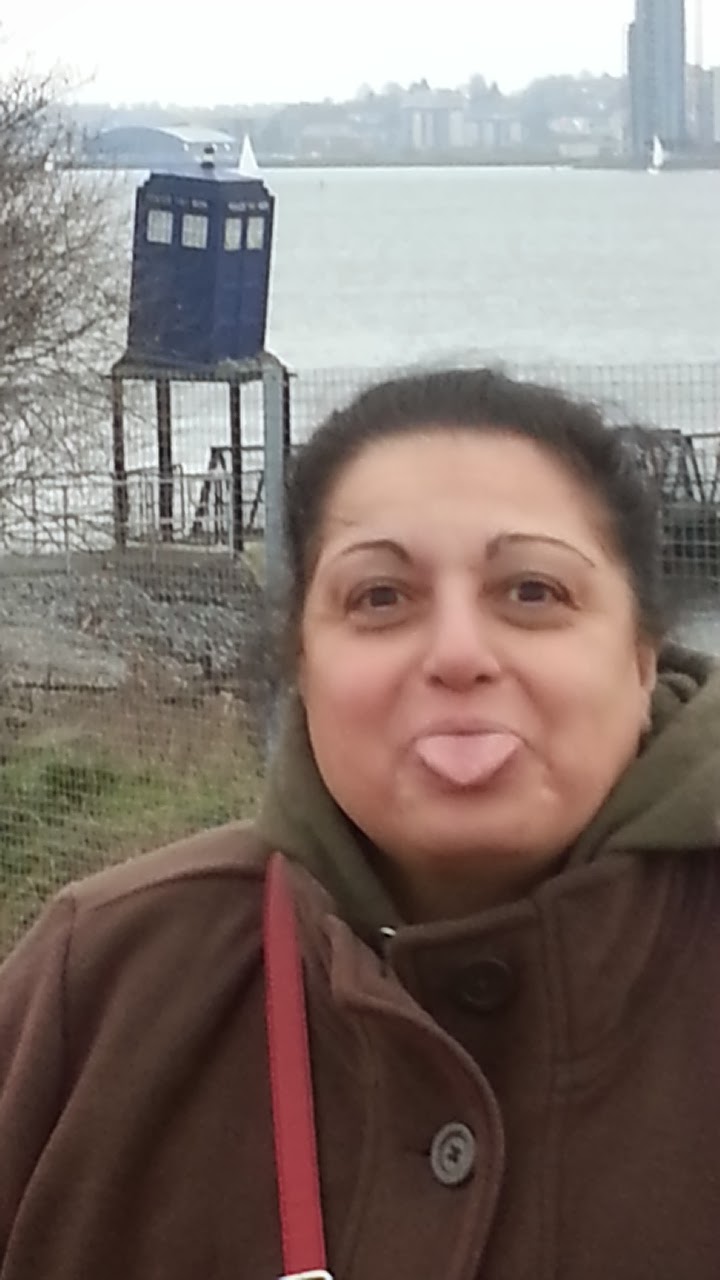 Once in Cardiff, we drove around lost a while and accidentally found our way to the Doctor Who Experience.

Oh, and it turns out that at some point, possibly when we missed the correct turn off into Cardiff off the M4, we got a speeding ticket.  So far we were only charged the £35 administrative fee from the car rental place.  Not excited about finding how much the actual ticket ends up being.

I got the full swag at Doctor Who (stuff like a t-shirt, postcards, stickers - one is a sonic screwdriver! - and a certificate of completion), and we had a fun time, wandering around the museum area, taking lots of pictures and videos. 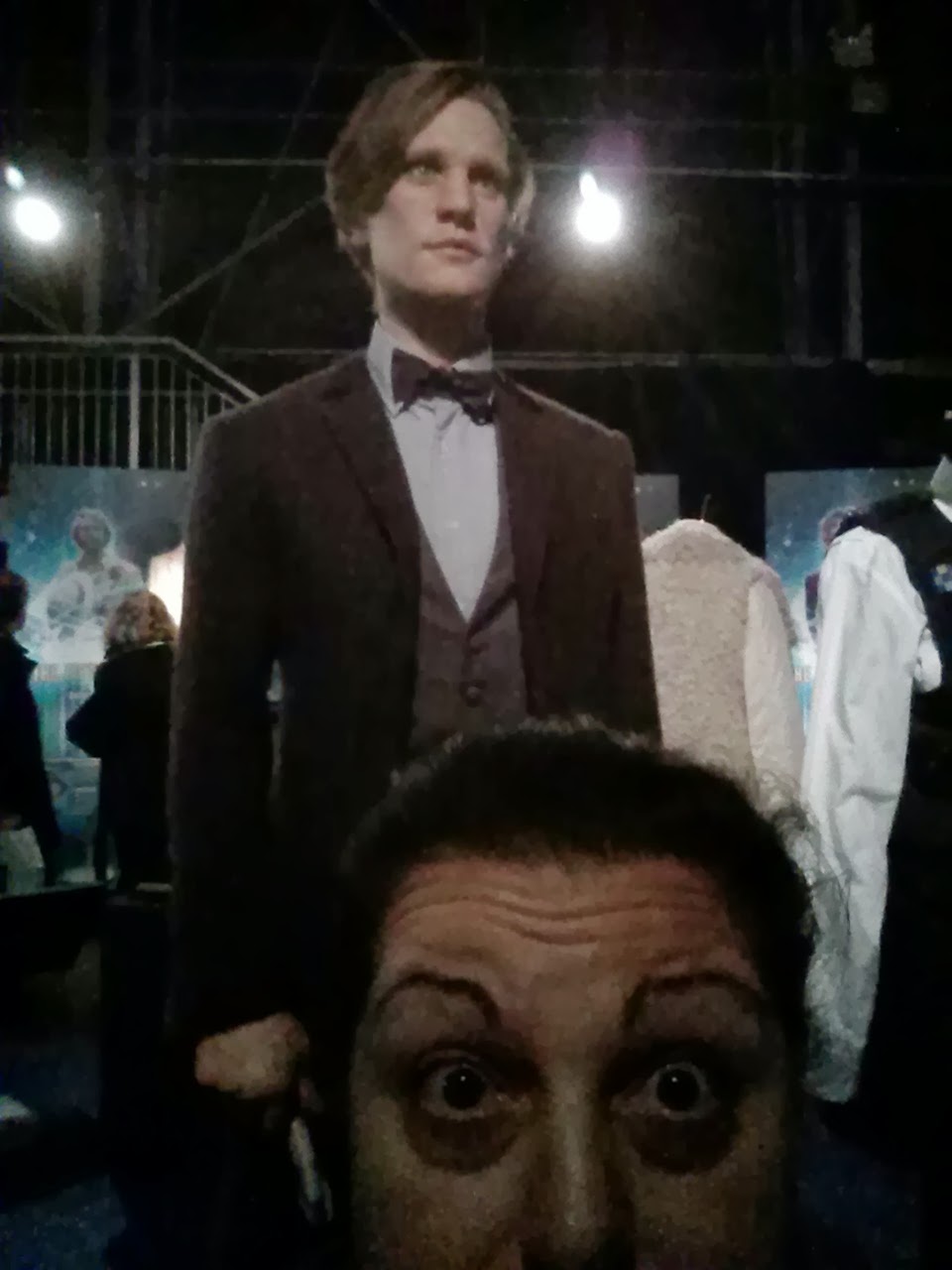 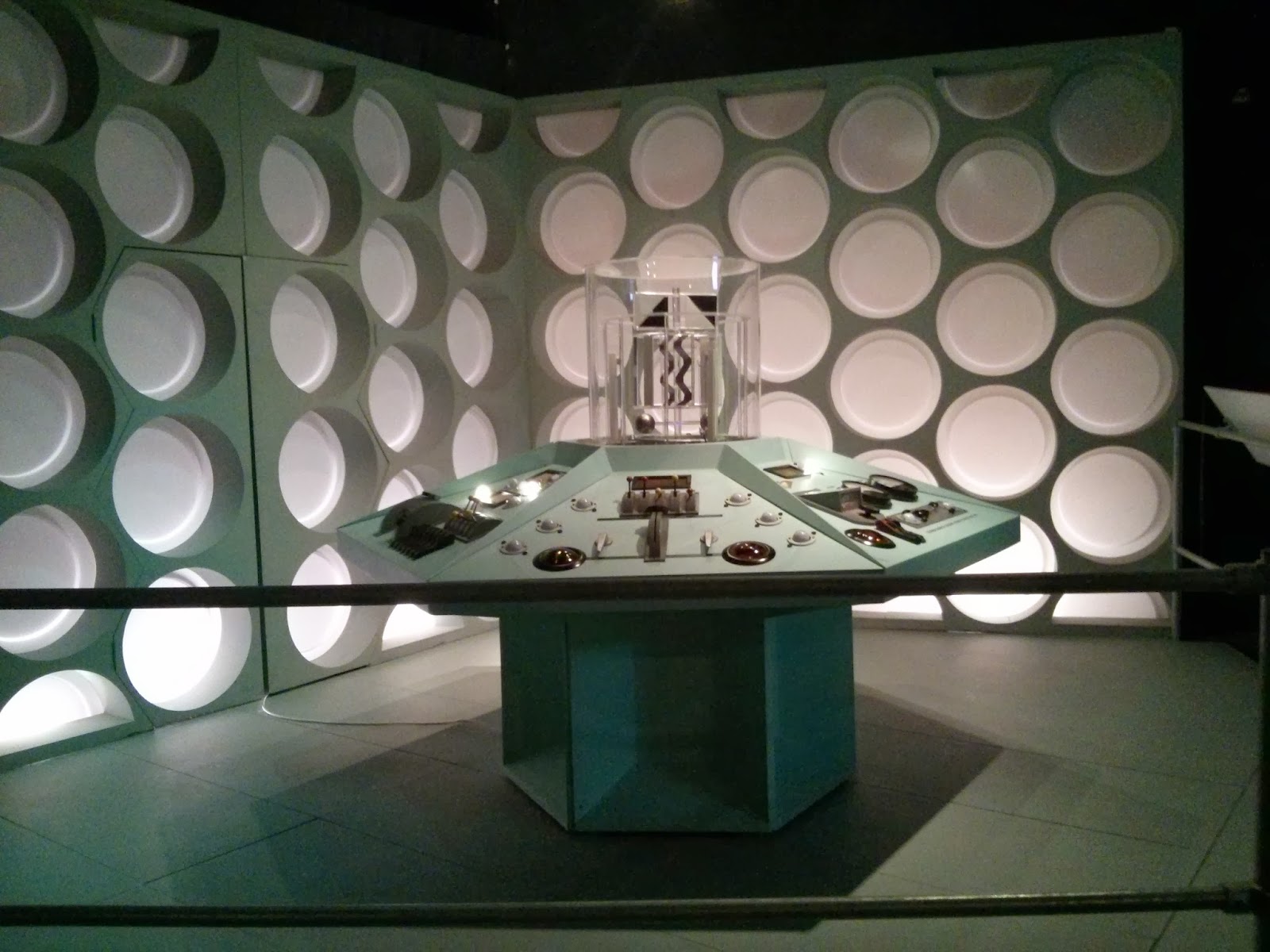 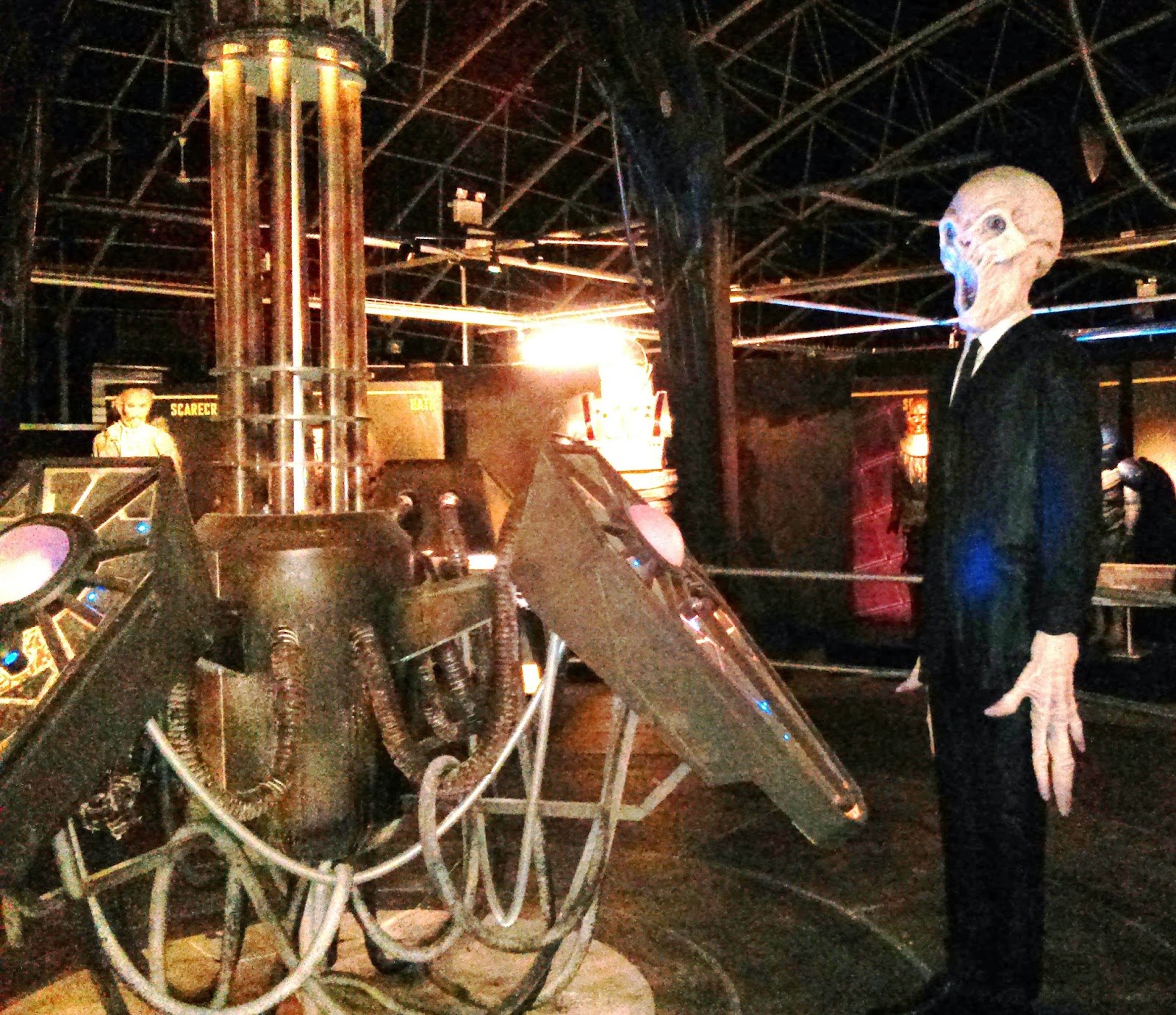 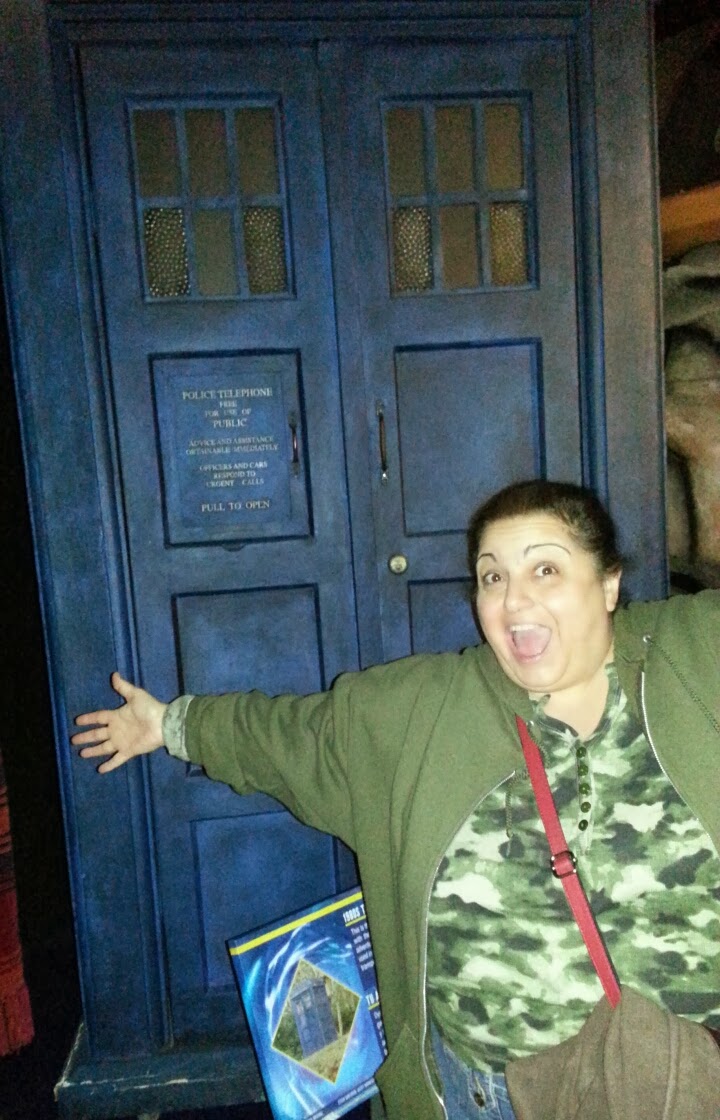 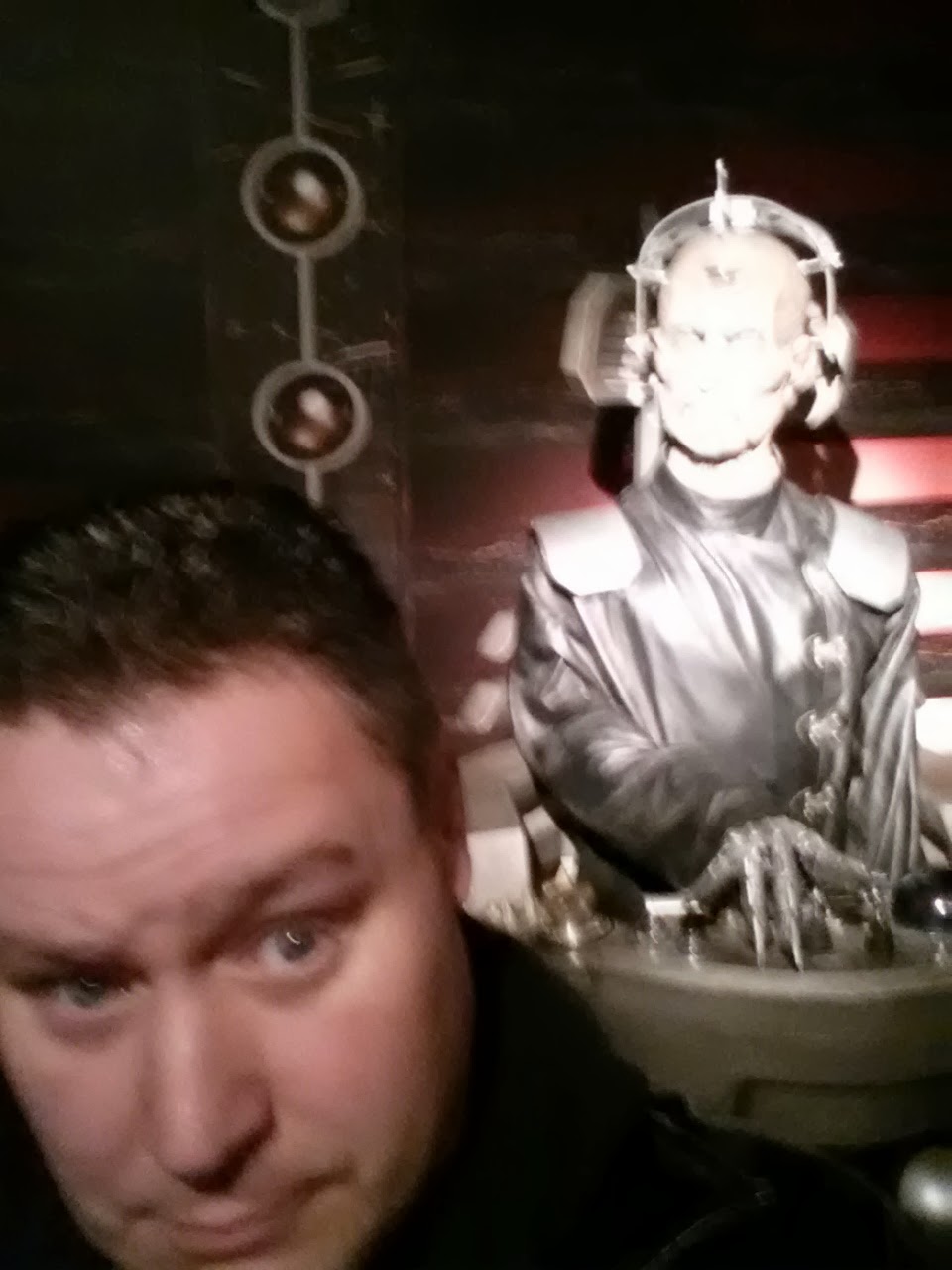 Yeah, so that took a while.

We had wanted to get to Stratford-Upon-Avon before dark, if possible.  Of course, it didn't happen, but because we wanted to pretend it might, we had to leave pretty much right after the Doctor Who Experience and so we didn't have time to really get to see Cardiff or tour the Castle.

We probably wouldn't have been able to find a way in anyway.

As it turned out, it got dark well before we got to Stratford and not only was it dark, it was raining.  Plus, there was a lot of traffic coming towards us on these little windy roads.

I tried to make it fun by singing along (loudly) with the radio, but Jeff didn't appreciate that at all.  At all.

Shakespeare's bones coming up next...
Posted by Toni at 8:56 PM 2 comments: